Rothenburg on the Tauber
This entire site, images and text, is copyright© MMV William Allin Storrer 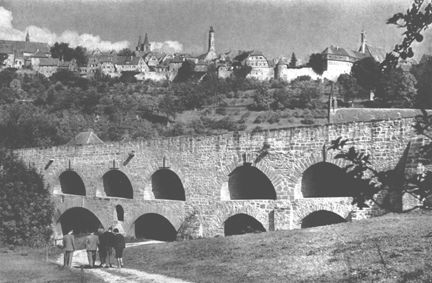 There was usually a gate, in one of the rows, leading to the inner courtyard.
Building the houses in this manner helped protect all the houses against the elements. Abutting walls helped prevent loss of heat. But however much a city this was, its character was never far removed from the country, As long as the gardens remained in the courtyard, the medieval city was a healthy place to live. Only after the medieval era were many of these courtyards built over, and only then did overcrowding become a problem.(44)
Municipal government was a relatively new idea at this time . . . In feudal times the people owed their allegiance to their overlord, but hardly did he owe them anything. But as much as the burgher served his city as policeman and soldier, so the city provided him services. The municipal government directed the collective functions of the city. The brook that supplied the water had to be guarded and public fountains had to be built in the public squares.(48)
And if we note that private homes might lack an oven for baking, there was a public one at the bakers.(41) Though it might have lacked a bathroom, there were public bath houses, and bathing was so popular that the idea even spread back out to the countryside.(47) There were hospitals in most every town.(49)
The shape and size of a medieval town were determined largely by two factors: the wall which was its physical limit, and the open central yard in or around which were located the principal church, the town hall, and usually guild halls, the market and the inns.(59) A typical walled city ranged from 400 to 40,000 (this latter the size of London in the fourteenth century),(59) and when a city was filled a new city would be built elsewhere. Only occasionally was the wall extended. Many cities never grew beyond a few hundred inhabitants, for they failed to attract the commerce so necessary to their survival, growth, and expansion.
In the medieval ages, the street was less a means of transportation than a line of communication.(55) The main streets were planned to facilitate movement of men and arms to the main gates.(54) Lesser streets might twist and turn all which ways, but such a plan broke the chilly winter wind that leapt the wall between city and country.(56)
Whatever else we may think of the medieval town, we must not think of it unsanitary. "Crude sanitation is not necessarily bad sanitation," states Mumford.(44) The cities were not overcrowded and were usually very clean. Though animals roamed free, they helped clean the town. The pig that roved the street was the world's first automatic garbage disposal and perhaps the best member of the Board of Health. When we hear of epidemics, we should not be too hasty in thinking that they were caused by a lack of sanitation, but perhaps by lack of a good winter diet. Francis Bacon. died when his first experiment in cold food storage failed - on himself.
This, then, is the medieval city, a curious blend of town and country walled in by tightly knit associations of church and guild, family and municipality, and stone and water, an island unto itself; medieval man's collective architectural expression.

Henri Pirenne (translated by I.E.Clegg). Economic and Social History of Medieval Europe. New York: Harcourt, Brace and Company.
Following, are quotes from the above source, as indicated and identified by the page number in parentheses.

This presentation is © copyright 1999 W.A.Storrer

Images for Rothenburg-ob-der-Tauber presentation
Images are shown in reverse numerical order.
W. A. Storrer slides are 5 Aug 63, Ektachrome processed by Ferranti-Dege in Cambridge, MA.
Siegfried photos were made at the end of WW II by (Colonel?) Siegfried on Agfacolor(=chrome). Siegfried was in the sanitarium in Athens, Ohio when this was prepared.