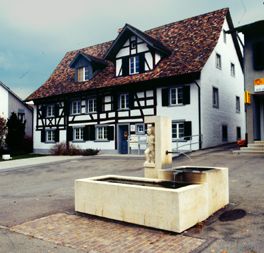 Town Hall, Siblingen
Email your news or comments to mailto: storrergenealogy@storrer.com.
This and related pages copyright © MMV William Allin Storrer
Traveling in Europe? CLICK HERE to learn about travel in Switzerland, Germany and elsewhere.
There are several sites out there for information about Schaffhausen and Siblingen. Here are some you might wish to try: To go directly to the site, click on the URL:
Political and other information on Siblingen; http://www.spectraweb.ch/~rspoer/sibilo.html
General Klettgau-Randen Valley information; http://www.klettgau.ch
Swiss family genealogy on the Internet; http://www.eye.ch/swissgen/surnam-m.htm
Schaffhausen stadt; http://www.stadt-schaffhausen.ch
Schaffhauser Nachrichten (Schaffhausen News/Messenger newspaper); http://www.shn.ch
SchaffhauserAZ (newspaper); http://www.schaffhauseraz.ch
Please, if you find any of these are not working, email me at storrergenealogy@storrer.com
The story of jass
Legacy of the mercenaries

Cards have been played for 650 years. This is a Swiss tradition which is almost as old as Switzerland itself.

The popularity of card games in the Alpine countries goes back to the days of the mercenaries. Author and card-playing expert Sergius Golowin writes: "The only thing that brought people together in that Babel-like mishmash of languages was the common passion for every foolhardy game. So amongst adventurers coming together from east and west cards created something which may be described as a common denominator". The one thing that the cards of those days shared with those of today was the fact that they were divided into four suits. Where did the card game actually come from? Its forebears were apparently dice and chess. The ingenuity of the game of cards, however, comes from the depths of anonymity, and no country and no one great spirit can lay claim to its discovery. Peter F. Kopp, art historian and expert on playing cards calls it "a cultural achievement of the people for the people".

A game without frontiers

The first mention we get of card-playing is its prohibition in Berne in 1367. Ten years later a Dominican known as Johannes von Rheinfelden describes the game of cards. Its main figures were four kings, of whom each held a different symbol. Every king had two marshals one holding in his hand a sign upright (over) and the other a sign hanging (under). The four kings had ten numbered cards each, so that the game had 52 in all.

In 1389 the authorities in Schaffhausen also prohibited the playing of cards. It was thought that these games had some inherent power to unleash passion which could lead to recklessness and brawling and might plunge whole families into disaster.

When the reformers gained control of Schaffhausen in 1529 the puritan clergy took over the struggle against fanatical card-playing. Laws, prohibitions, fines, even banishment, followed upon each other's heels. But they all availed nothing; the addiction to cards was stronger and produced ever new evil offshoots. This was the language of the ruling clergy who incessantly attempted to deal with the "drinking, gorging, dancing and playing" with drastic metaphors such as "scraping out the barrel".

Innocents from the countryside

Jass itself seems to have "immigrated" into Switzerland towards the end of the 18th century in the company of Swiss mercenaries returning from Holland. In Dutch the figure of the farmer as trump is known as "Jas" - and the "Nell", the second highest card, also comes from Holland. The first mention of the word "jass" comes from the village of Siblingen in Canton Schaffhausen. In this cattle-dealing village card-playing seems to have been particularly rampant, and the local priest, Balthasar Peyer, inveighed against it from the pulpit, crying out that "cards are often played right through the night on Sundays as well as on workdays". When none of his words were heeded he reported a number of farmers whom he had caught playing cards in the village hall to the Council in Schaffhausen. The main accused, Max Tanner and Sebastian Weber, were called for questioning. They admitted that they had played a game "which is called jass over a glass of wine, more than that they cannot be reproached for". The Council contented itself with "a severe caution in order to keep them away from card-playing". AB (the source is on the internet, but AB is not identified)

We cannot identify the Max Tanner, yet, but we have three candidates for Sebastian Weber in our genealogical archive.